skip to main | skip to sidebar

Charles enjoying a brief rest and a glass of ...
Barbara Merry chats to Ian, the Goldmark Gallery researcher

Frances signs books above, whilst below Brian Merry talks to Sue Goldmark 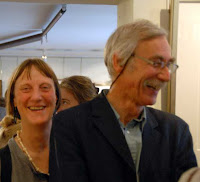 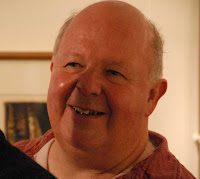 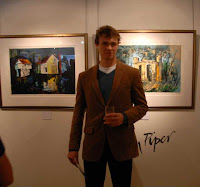 Mike and Frances at the opening

We have finally made it! Libby drew the short straw for the day's zero hero and driver. We had hoped for a day off but no, Charles filmed the proceedings whilst Libby photographed. No rest for ...
We arrived in Uppingham just about opening time and people were already arriving. Over the next couple of hours the numbers grew, there must have been about 300 people in the galleries, absolutely staggering and we met up with many friends we had made over the past 18 months. The ambiance was terrific, very friendly, aided not least by Kate's wonderful buffet. Frances Spalding (whose splendid book John Piper, Myfanwy Piper. Lives in Art was being launched) was indefatigable, gave two talks and signed books endlessly, engaging with every buyer personally, absolutely stunning! And the legendary Orde Levinson, he of the Piper prints Catalogue Raisonne, also attended - quite a coup. 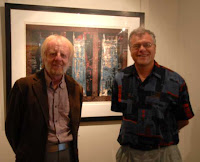 The DVD can be obtained from the Goldmark Gallery, Uppingham, Rutland, Tel 01572 821424, email info@goldmarkart.com, or see their website www.goldmarkart.com

What next? Who knows. We're open to offers. We make a good team, inspire each other and spark the imagination - so if you're interested - you know who to contact!!

Well, what have we been doing since the last blog entry? You may well ask, and since you do:
LIBBY scripted the Extras films and made slide shows of original Piper works and location stills.
CHARLES made adjustments to DVD, recut parts, added new credits, titivations, then edited extras, added visual material and music, designed opening and closing credits for extras based on Piper's marbled papers (note green for GO and red for END - ultra clever this stuff!), downloaded plug-in for jolly frames on extras, sound mixed levels throughout. He also transferred music from suitable LPs, each more than 50 years old (to by-pass copyright laws) on to the computer, cleaned same of clicks etc and then extracted 5-6 minute sections for the slide shows.
At the 11th hour (literally) his negotiations with Shell came good and they allowed us not only to use parts of the film Crown of Glass (about Liverpool Met Cathedral) in our main film, but also to add the entire Shell documentary to our DVD - a HUGE bonus! Not least because it's fantastic (almost unknown) footage about an amazing project.
Once all the sections were complete Charles then built the DVD (think LEGO writ large), imported assets, 12 tracks average, marbled papers added for menu pages - for example the opening, extras, slide shows and the sub sections (Piper website and Blog [THAT'S US!]), DVD access software for non Mac users. He also had to produce and add a short Goldmark Gallery promo at the last minute.
And then the testing, the endless testing and re-jigging, which went on and ON and ON and ON and ON until 1am Sunday 27 September (each change takes about 4 hours computer processing time, so not something to be taken lightly). And when is the opening? Oh, a mere 10 hours from now! Perfection run rampant!

You may well ask! There's still most of the captions to add, some more sound tweaking, eagle eyed Charles spotted a frame out of place, and there's the extras to do - slide shows of prints, originals and location photographs, films of the King George VI story (unlucky with the weather), Piper personal (amusing stories), the entire Curwen Press interview with Stanley Jones which will be of great interest to printmakers, and the symbolism of Oundle windows and Chichester tapestry. And all this has to be completed by Tuesday 22 September, so we've both got our work cut out - what's new pussycat?
Posted by Libby at 02:14 No comments:

We decided to put in a new Osbert voice because he sounded too much like the Piper voice, so after a few circuits of plum digestion, Charles managed a well modulated Sitwell as oppose to his kindly and somewhat tentative Piper. Charles then started serious work on sound levels and since he is somewhat of a perfectionist he couldn't even spare the time for a lunch break so a sandwich was delivered to his lair. The ongoing DVD was finally completed and rendered and a copy made by 4.15.
Twenty minutes later Mike Goldmark and his son Jay arrived to view the film which we watched in the Electrical Shadow Digital Cinema. Luckily they were both most impressed, felt it set a new standard for art films, best work Charles has ever done for Goldmark, felt it was hugely informative but without being didactic and also very entertaining.
So a definitive thumbs up and we have not been thrown to the lions!
And they also appreciated the meal Libby cooked for them afterwards.
PHEW!
Posted by Libby at 01:59 No comments:

Today we finished double checking Chichester, Aldeburgh and Venice. Then back to the start adding music and sound effects throughout, checking the sound levels. The tweaking stage is akin to editing a manuscript, dotting the 'i's', checking the spelling, punctuation etc - a very long winded business and made more difficult by the fact that there are sometimes up to 10 different tracks to co-ordinate. Various changes had to be made to my narration which involved more sound recording downstairs. We finally finished putting all 16 sections together at 5pm and after a quick cuppa dashed back upstairs to watch the whole thing through for the first time. It's 75 minutes long! But pretty good we think, although we are getting to the stage of not being able to see the wood for the trees.
Posted by Libby at 01:51 No comments:

Having risen at 6.45 to get to Epsom in time for the lecture (bearing in mind possible delays on the M25) and then driven up to Film Farm without a lunch break, Libby arrived ready for a restorative cup of tea at 4.30pm. We then clambered up to the edit suite and spent the next 3 hours reviewing Charles' new intro, his Spitfire filming and the added musical interludes and then double checked up to the Stowe section.
Posted by Libby at 01:43 No comments:

Libby
Kent, United Kingdom
Brought up in Stockton-on-Tees, went to Sheffield University to study Architecture and ended up with a degree in English. Took a secretarial course and worked in an Architect's office hoping to put myself through art school. Met Graham, married and moved to Saudi Arabia (where I was PA to a Government Minister), then Iraq (I did a correspondence course in Interior Design to fill up the time), then Hong Kong. Our two boys were born there and I worked as a freelance graphic designer. Back to UK (Englefield Green) in 1997, did MA and PhD at Royal Holloway, London University (a hop and a skip down the road). Moved to Kent 2003. The rest is history.